A 16-month-old toddler died from hand, foot and mouth disease in Malaysia 's Sarawak state on Tuesday, bringing the death toll from the illness this year to nine, officials said. The boy was admitted to a hospital in oil-rich Miri town on Saturday in critical condition and could not be saved because his parents had sought treatment too late, Sarawak Deputy Chief Minister George Chan was quoted as saying by national news agency Bernama. 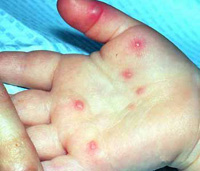 Chan said 7,857 infections have been reported in the state this year, but the number of new cases has declined and only 39 patients remain hospitalized. Authorities in Sarawak state on Borneo island early last month shut all 1,600 kindergartens, day-care centers and preschools to stop the disease from spreading among children the main victims of the illness. The premises reopened Monday after the number of infections fell.

Chan said health officials would beef up enforcement and inspection of all education premises, and those found to have two or more cases would be immediately closed until cleared of the disease. State health officials could not be reached for comments.

Hand, foot and mouth disease is mildly contagious and rarely fatal. It mainly strikes children below age 10 and is unrelated to the illness in cattle known as foot and mouth disease. Officials said the disease seems to emerge in a cyclical period every three years in Sarawak . It spread this year to neighboring Brunei , where a boy died recently of the disease. Some children in Malaysia 's northern Kedah state were also affected but no death was reported, reports the AP.