Prime Minister Tony Blair and the leader of the opposition Conservatives plan to meet Tuesday to discuss campaign finance reform, as both seek to blunt criticism about secret loans their parties accepted. Blair's governing Labour Party revealed last month that it had taken loans of 14 million pounds (US$25 million; 20 million) from 12 supporters of whom at least four were nominated to the House of Lords. 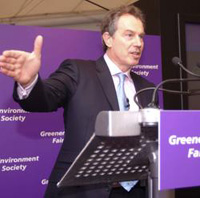 The prime minister denies allegations that he nominated backers for seats in the House of Lords in exchange for financial support. After initially refusing to provide details of loans it had received, the opposition Conservative Party last week revealed the names of backers that lent it nearly 16 million pounds (US$28 million; 23 million) to help fund the 2005 election campaign.

The Tories said they had paid back another 5 million pounds (US$8.7 million; 7.2 million); that allowed them to keep the names of those lenders secret. Under British law, parties must reveal the name of anyone who donates more than 5,000 pounds (US$8,650; 7,000), but loans of any amount can be kept secret, as long as they are made on commercial terms, reports the AP.