A Kremlin-allied lawmaker on Tuesday criticized Iran 's recent torpedo and missile tests as a counterproductive show of might at a time when it should be trying to prove its constructive approach to resolving the crisis over its nuclear program, Russian news agencies reported. Such actions "are counterproductive and do not create the necessary atmosphere of trust at the consultations and negotiations around the Iranian nuclear program," the ITAR-Tass news agency quoted Konstantin Kosachev, the head of the parliamentary foreign affairs committee, as saying. 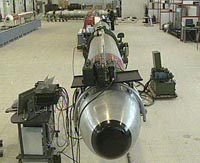 "It is clear that Iran is demonstrating its muscle in order to forestall any discussions of a possible operation using force against Iran ," he said, according to the RIA Novosti news agency. Kosachev's comments reflected increasingly visible irritation among Russian officials over Iran 's stance in the nuclear crisis, which Moscow had tried to ease by proposing the transfer of Iran 's uranium enrichment program to Russia to assuage concerns about Tehran 's intentions. Tehran has not accepted the offer, which Moscow has made contingent on Iran resuming a moratorium on domestic enrichment.

"I would welcome more flexibility from Tehran in connection with the well-known Russian proposal on joint uranium enrichment, and not place bets on the demonstration of some new types of weapons," Kosachev said, according to RIA Novosti. During weeklong maneuvers in the Persian Gulf, Iran has tested the "Hoot" or "whale" torpedo, which it said moving at 360 kilometers per hour (223 miles per hour)  making it about three or four times faster than a normal torpedo and as fast as the world's fastest known underwater missile, the Russian-made VA-111 Shkval, developed in 1995. It is not clear whether the Hoot was based on the Shkval.

Iran also said it had successfully tested the Fajr-3 missile, which can avoid radars and hit several targets simultaneously using multiple warheads. The United States and its Western allies have been watching in Iran 's progress in missile capabilities with concern. Iran already possesses the Shahab-3 missile, capable of carrying a nuclear warhead and hitting U.S. forces in the Middle East . The upgraded version of the ballistic Shahab-3 missile can travel over 2,000 kilometers (about 1,200 miles), putting Israel within its easy range, reports the AP.