A group of Ukrainian political parties demanded on Monday that parliament support a total recount of the March 26 parliamentary vote, which international observers declared was this ex-Soviet republic's most democratic ever. The 450-seat chamber was expected to consider the measure on Tuesday in the presence of President Viktor Yushchenko. A recount could deal a blow to Yushchenko, who has held up the vote as a major success, and could drag out the process of forming a governing coalition. 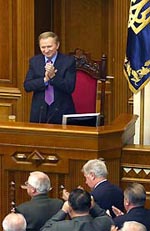 The parties calling for the revote are all minor groups that failed to make it over the 3 percent barrier to enter parliament, but if a recount were to change the results significantly, the presence of any of them in parliament could influence coalition talks. The parties, which include pro-Yushchenko groups and a radical opposition party, have complained that a four-day delay in releasing complete preliminary results raised concerns about fraud during the count.

Central Election Commission head Yaroslav Davydovych has insisted that the delay was caused by incompetence in some regional commissions and technical problems, ruling out the possibility of fraud. The parliamentary vote will not be binding, said Yevhen Poberezhniy of the independent Committee of Ukrainian Voters, which does not support a total recount.

"So if parliament supports this, it would basically be a political decision," he said. "It would be used by those parties to say, 'See, parliament called for a revote, but their call wasn't implemented."' Poberezhniy added that Ukraine's new election law is not clear about who can order a recount. The parliament session will be held with the lawmakers who served before Sunday's vote. Some belong to parties that failed to enter parliament and so have a personal stake in supporting a recount.

The March 26 parliamentary election was widely praised by international observers and the West as a free and fair vote. The Ukrainian voters' group, which deployed 5,000 observers, recorded some irregularities, mistakes and technical problems, but nothing to suggest widespread fraud, Poberezhniy told The Associated Press. Yushchenko has expressed a willingness to support recounts in voting precincts where serious concerns have been raised, but he has not said whether he would support a total recount.

The parties calling for a recount include the pro-Yushchenko Pora-PRP, led by former heavyweight boxer Vitali Klitschko, and the party of parliament speaker Volodymyr Lytvyn. A pro-Russian party led by Natalya Vitrenko, who is strongly anti-American, has separately asked for a recount.

Vitrenko's party received 2.93 percent of the vote, just .07 percent below what it needed to pass into parliament. She claimed her party was hurt by problems with voter lists in Ukraine's Russian-speaking southeast, where she has strong support. Viktor Yanukovych's pro-Russian Party of the Regions win the most votes in Sunday's election , with 32 percent. But it failed to capture a majority, so must seek a coalition partner among the divided Orange team if it hopes to enter the government.

Far behind was former Orange Revolution heroine Yulia Tymoshenko, with 22 percent, and Our Ukraine, with 14 percent. The Socialists, which supported the Orange Revolution, and the Communists also entered parliament. Vitrenko's party has launched a 24-hour protest outside the Central Election Commission headquarters, reports the AP.