The Palestinian militant group Hamas on Wednesday dismissed Israeli election results as another face of Israeli policy designed to eliminate the Palestinian issue, while other Arabs warned the Jewish state over unilateral action. Acting Prime Minister Ehud Olmert's centrist Kadima party picked up 28 seats in Tuesday's vote for the Knesset's 120 seats. Officials in the party said he should be able to cobble together a parliamentary majority for his plan to pull out of much of the West Bank and draw Israel 's borders by 2010. 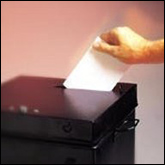 Such unilateral action has been criticized by the Arabs, and a summit of Arab leaders that ended in Sudan Wednesday collectively rejected such moves while repeating its commitment to an 2002 Arab peace initiative based on land-for-peace. But a sharp reaction came from the political leader of Hamas, the militant group which swept Palestinian legislative elections in January and formed the Palestinian government. The group has rejected international pressure to reverse its decision not to recognize Israel 's right to exist.

"I believe, regardless of who had won in the (Israeli) elections, the Zionist position altogether, particularly that of the three parties (Kadima, Labor and Likud), is hostile toward Palestinian rights and insists on liquidating it and wiping it out," Khaled Mashaal told The Associated Press in Damascus, Syria. He said the top Israeli parties were in agreement on the major issues: refusal to give up Arab parts of Jerusalem , withdraw to the borders before the 1967 Arab-Israeli war, grant the Palestinian refugees the right of return and dismantling the main Jewish settlements.

"Consequently, the Zionist position, be it that of Kadima or others, is one that buries the peace process, negates its existence and does not give it a chance. That position is a declaration of war against the Palestinian people," he added. Arab League Secretary General Amr Moussa, speaking to reporters at the annual Arab summit in Khartoum , Sudan , said Wednesday it was doubtful that the Israeli elections would bring anything new.

"The Arab world must study all its options. Because it is absolutely out of the question to accept ... unilateral withdrawals according to Israeli whims. This just doesn't work, and it can only worsen the situation," he said. "This Israeli government has already stated that it will act unilaterally ... we cannot accept that the borders between Israel and Palestine be drawn up unilaterally by Israel ," Moussa told a news conference.

Syria, the most hard-line of Arab states on the Arab-Israeli conflict, also insisted on a comprehensive settlement that is Israeli withdrawal from the West Bank, the Arab-populated sector of east Jerusalem as well as the Golan Heights, which Damascus lost to Israel in the 1967 Mideast war. "We were expecting that," said Syrian Foreign Minister Walid Moallem of the election results. "But it's important to have a comprehensive withdrawal from the lands occupied in 1967," he told reporters in Sudan .

Heavyweight Egypt, the first Arab country to have peace with Israel and one of only two Arab states to sign a treaty with the Jewish state, chose not to immediately take a stand on the election results. Egyptian Foreign Minister Ahmed Abul Gheit said "it is too early to analyze" the result of the Israeli election, which he said brought a few surprises.

"The results were different from expectations," Abul Gheit told The Associated Press in Khartoum . He warned Israel against unilateral moves. "The coming Israeli government must stay away from unilateral measures and move toward peace according to the Arab initiative," he told reporters later when asked to comment on the Israeli elections.

The Palestinian Authority also said the election results would have little effect unless Olmert changes his policies "and gives up unilateral ideas," Palestinian President Mahmoud Abbas told reporters in Khartoum . In other comments made just before his departure from Khartoum , Abbas repeated his rejection of any unilateral Israeli actions.

"We want negotiations and not to dictate unilateral solutions," he said. Jordan , the Arab country beside Egypt with a peace treaty with Israel , expressed hope that Israel 's election would contribute to the creation of the "right condition" for resuming Palestinian-Israeli negotiations. Speaking in Khartoum , Foreign Minister Abdul-Ilah al-Khatib said: "We think that only through negotiation the parties will be able to reach an agreement and have sustained peace in the region", reports the AP.