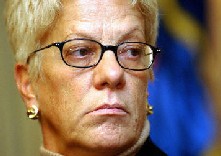 The Bosnian Serb wartime commander, sought on genocide and war crimes charges by the U.N. tribunal at The Hague, remains the biggest obstacle to the Balkan country's chances of eventually joining the European Union.

The EU has given Belgrade until the end of March to find Mladic and hand him over to the U.N. court or face a suspension of talks, set for April 5, on building closer ties with the bloc.

Belgrade officials recently requested an extension of the deadline, saying more time was needed to hunt down Mladic, who is believed hiding in Serbia under the protection of army hard-liners. But the EU apparently turned down the request.

During her talks with Serbian Prime Minister Vojislav Kostunica on Wednesday, Del Ponte is expected to push again for Mladic's capture and assess measures taken by Serbia's government to arrest him.

Del Ponte then will report to EU ministers in Brussels who are to decide whether to suspend talks with Belgrade on a pre-membership accord.

Del Ponte's visit to Belgrade is her first since the death on March 11 of former Yugoslav President Slobodan Milosevic in his prison cell near The Hague where he was standing trial for his part in the bloody breakup of former Yugoslavia in the 1990s, reports the AP.