A fire swept through a downtown building early Wednesday, killing 12 people and injuring 33 others trapped inside by locked security gates and belongings piled in the passageways. Johannesburg Fire Department spokesman Malcom Midgely said the dead, who appeared to be illegal immigrants from Malawi , suffocated because they could not get out of the building. 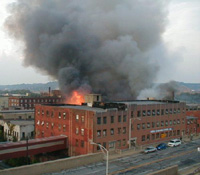 Hospital officials said nine people were in critical condition and 19 others were seriously hurt. Midgely told the South African Press Association that it was not clear how many people were living in the building when the fire broke out, but he estimated there were 150 beds inside.

They had been living illegally in a disused workshop in the building and were trapped by security gates and the belongings they had piled in the passageways, said Midgely. "One of the bodies had the imprint of the security gate on his skin," said Midgely.

He said it was difficult to find out what caused the fire because most of the occupants had entered the country illegally from Malawi and had run away fearing arrest. South Africa 's poor and impoverished and illegal immigrants from other African countries often take up residence in abandoned buildings in the city center. Fires often flare in the overcrowded buildings where the residents use candles and kerosine heaters, reports the AP.