China expressed its "strong indignation" Tuesday over comments by Italian Premier Silvio Berlusconi, who publicly loathes communists and said this week that communists in China boiled babies for fertilizer. 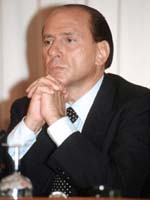 Italy's Foreign Ministry moved to limit the damage later in the day, releasing a statement in which it said that the premier's words were a reference to "episodes that took place in the past," and stressing that Berlusconi did not intend to stoke tension with China.

Berlusconi, who is running in an April 9-10 election against center-left leader Romano Prodi, has a history of getting into trouble for speaking his mind. In 2003, he told a German lawmaker in the European Parliament that he should appear in a movie as a Nazi concentration camp guard.

In the latest incident, the conservative premier made the comments Sunday at an election rally in Naples. Prodi, whose coalition includes Communists, seized the opportunity Tuesday to accuse Berlusconi of discrediting Italy's reputation abroad.

"Do you realize what kind of an image is reflected by a country whose premier says such a thing?" Prodi, who was campaigning south of Rome, was quoted as saying by Italian news agencies. "This is an offense to a country with a population of 1.3 billion people."

The Chinese Embassy in Rome released a statement in which it "expressed strong indignation for the unfounded words of Premier Silvio Berlusconi." It expressed hope that instead "the words and actions of Italian leaders can favor the development and stability of bilateral relations between China and Italy."

"They accuse me of having said over and over that the communists eat babies. Read The Black Book of Communism and you will discover that in Mao's China, the communists didn't eat babies, but they boiled them to fertilize the fields," Berlusconi said, reports AP.