Police stormed a prison in the Georgian capital Monday after inmates rioted in an alleged escape attempt, sparking a gun battle that left two guards and seven inmates dead, the Justice Ministry said. At least 10 guards were wounded in two hours of shooting at the Ortochala prison in Tbilisi, home to some 4,000 inmates, and several buildings in the compound were burned, Justice Minister Georgy Kavtaradze said. 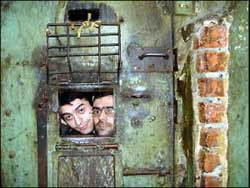 Officials were not sure how the inmates got weapons, but believe they were smuggled in. Kavtaradze said the riot was planned by several leaders in the jail as part of a carefully orchestrated escape attempt. TV footage showed riot police armed with shields pouring into the prison. Ministry spokeswoman Tamar Mchedlishvili said seven inmates were killed and 16 wounded.

She said the revolt began around 2:30 a.m. (2130 GMT Sunday) when prisoners broke down the doors of their cells and the bars on their windows. "Then they set sheets and blankets on fire and threw them down on the special forces soldiers," she said. Mchedlishvili said the age and poor condition of the prison made it easier for the prisoners to get out of control quickly.

"For an hour, our officers warned the participants in the revolt that if they did not calm down and return to their cells, then an operation would begin. Unfortunately, these warnings were not listened to," Kavtaradze said. He said authorities acted as they would have "in any civilized country."

"I want to underline that this morning our capital was under a real threat," he said. Elena Tevdoradze, the head of the parliament's human rights committee, said she tried to negotiate with the inmates but "they were decided in their actions." She said one of the causes for the riot may have been six inmates being beaten in the prison hospital.

Hundreds of relatives of inmates gathered outside the prison, saying they had received cell phone calls asking for help and reporting that many had been killed. Georgia has suffered frequent jail breaks, blamed in part on a lack of funding for security. Some 9,000 inmates are serving sentences in the nation's prisons, where authorities face stiff resistance in their campaign to reduce the influence of criminal bosses.

Parliamentary speaker Nino Burdzhanadze said "very serious forces working to bring about destabilization" had sparked the prison revolt and sabotage that cut off Russian electricity supplies early Monday. She did not indicate whether the source was domestic or foreign.

"What happened during the night... these are all links in the chain," Burdzhanadze said. "These aren't accidental incidents." The rupture of the power lines is the second such incident to hit Georgia's energy supplies this year. Two explosions on pipelines running through southern Russia cut natural gas supplies for several days during an unusually severe cold snap and explosions downed high power lines in a western part of the country. Georgian officials accused Russia of sabotage, reports the AP.