Landslides caused by melting snow and heavy rains have destroyed dozens of homes in central Serbia , forcing hundreds of people to evacuate the area, media and officials said Wednesday. Dozens of other homes have been damaged in the Trstenik region, about 120 kilometers (72 miles) south of Belgrade , prompting local authorities to declare a state of emergency. There have been no reports of injuries. 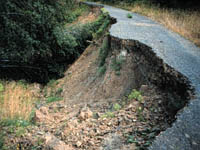 In other central Serbian municipalities, the landslides have left many villages without water or electricity and destroyed or damaged houses and roads. "The situation is getting worse by the hour," said Dragan Andrejic, chief municipal official in Trstenik. "Ground is splitting, walls are cracking, roofs falling."

The landslides started several days ago and progressively worsened. But there has been no rainfall over the past two days. Prime Minister Vojislav Kostunica plans to visit the jeopardized regions later Wednesday, authorities said.

The government has offered to relocate the residents whose houses have been destroyed by the landslides, and has provided funds for their repair. In the meantime, most are staying with relatives or friends in other villages. Experts have said the landslides were the result of recent heavy rains and melting snow, which also led to the swelling of rivers.

One of the most heavily struck villages is Bogdanje, near Trstenik, where some 150 houses were destroyed, and will have to be built on another, safer location. "I have worked all my life, and now my home is gone," Verica Radojevic, 64, from Bogdanje, was quoted as saying by the Blic daily on Wednesday. "Our lives are gone."

In the municipality of Krusevac to the east, the landslides and flooding rivers have damaged 18 roads, threatening to cut off some of villages. A regional road, between the towns of Valjevo and Ljig, about 80 kilometers (48 miles) south of Belgrade , also was cut due to the landslides, reports the AP.