Israel to allow in food from Egypt

Israel opened Wednesday an additional crossing with the Gaza Strip to allow emergency food from Egypt to enter the impoverished Palestinian area, Israeli and Palestinian officials said. The main crossings of the Gaza Strip have been closed for much of this year, causing food shortages in Gaza and great losses to Palestinian merchants and farmers who cannot export their products. At the urging of the United States , Israel had on Monday opened the largest crossing, Karni, to allow food into the area but was not yet allowing cargo to come out of Gaza . 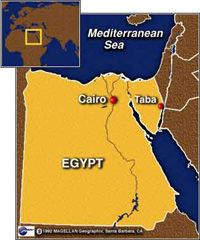 Israel to allow in food from Egypt

The Israeli side of Kerem Shalom opened Wednesday morning but the Palestinian side was not expected to be open until noon , and then the Egyptian cargo could enter, the Israeli border authority said. At Karni, 200 trucks were slated Wednesday to pass into Gaza , the authority said. The United States had pressed Israel to open the crossings during a meeting Sunday of Israeli, Palestinian and American officials. Israel has kept the crossings closed on and off since mid-January over concerns Palestinian militants are planning attacks there, reports the AP.