Prince Charles on Tuesday criticized the Danish cartoons of the Prophet Muhammad, as well as the "ghastly" violence that followed them, calling on all "responsible men and women" to respect the religion of others. "The true mark of a civilized society is the respect it pays to minorities and to strangers," the Prince of Wales told about 800 people at Al-Azhar University in Cairo . 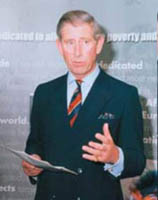 The prince and his wife Camilla, the Duchess of Cornwall, visited Al-Azhar, the foremost Islamic institution in the Sunni Muslim world, on the second day of their visit to Egypt . They were hosted by the grand sheik of Al-Azhar, Mohammed Sayed Tantawi, the top Islamic cleric in Egypt , who awarded the prince an honorary doctorate in recognition of his work to promote the understanding of Islam in the West.

Some Al-Azhar clerics had criticized the decision to bestow the degree on the prince. They argued that Charles did not do enough to deserve it. As if to answer these critics, Sheik Tantawi went out of his way to quote the prince's views of Islam and Muslims, repeatedly citing a speech given in Oxford in 1993, and adding that the prince's ideas were the fruit of "serious study."

When the doctorate in a maroon leather folder was handed over after the prince's speech, there was a surge of applause from the audience, which included at least 150 Muslim clerics in plain gray robes and white turbans topped with red. Clearly moved, the prince bowed slightly to the crowd and waved in thanks.

"Responsible men and women must work to restore mutual respect between faiths," the prince said in a speech that referred to Muslim, Jewish and Christian scholars and quoted the holy books of the three religions. "The recent ghastly strife and anger over the Danish cartoons shows the danger that comes of our failure to listen and to respect what is precious and sacred to others," he said, referring to the cartoons drawn and first published in Denmark and later reprinted in several European nations, provoking riots in many Muslim countries.

Some of the caricatures depicted the 7th century Prophet Muhammad as a man of violence, including one that showed him wearing a turban that looks like a bomb. The prince and his wife arrived in Egypt Monday afternoon for a five-day visit billed as intended to promote interfaith tolerance and the prince's environmental initiatives.

Charles is expected to inaugurate the British University in Cairo , visit the western desert oasis of Siwa, and lay a wreath at the Commonwealth cemetery at El Alamein , the site of a 1942 battle that was a turning point in World War II. The royal couple leaves Friday for Saudi Arabia , reports the AP.