Iran 's Foreign Minister Manouchehr Mottaki on Tuesday called his Pakistani counterpart and discussed the dispute between Tehran and Washington over his country's nuclear program and other bilateral issues, Pakistan 's Foreign Ministry said. A ministry statement said Mottaki discussed with Khursheed Kasuri "matters of bilateral and mutual interest, including the latest developments with regard to the Iranian nuclear issue." 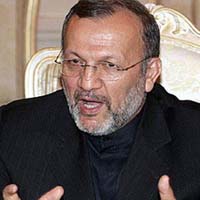 It said Kasuri "reiterated Pakistan 's position that a peaceful solution should be found to the Iranian nuclear issue," and that Pakistan also supported the Iran-European Union dialogue on this issue. The two ministers "also discussed the efforts of China and Russia in this regard," and Kasuri said Pakistan opposed the use of force and favored a diplomatic resolution to this crisis, the statement said.

Pakistan , the world's only known Islamic nuclear power, has been trying to defuse Iran-U.S. tension over Iran 's nuclear program. Washington has said that Tehran wants to acquire nuclear weapons, but Iran insists its program is designed only to generate electricity.

On Tuesday, Kasuri told Mottaki that his country had fully cooperated with the International Atomic Energy Agency on the nuclear issue, and "as a friend of Iran, Pakistan wanted the situation to be defused and that all concerned parties should play their role in achieving this objective."

"Pakistan will also do its best diplomatically and ... has already engaged with Iran, the U.S.A., China and EU in this regard," the statement quoted Kasuri as telling Mottaki, who extended an invitation to him to visit Tehran, which Kasuri accepted.

Relations between Pakistan and Iran have fluctuated since 2004 when Tehran told IAEA that it had received nuclear know-how from Pakistani scientists who had links with the nuclear black market. It emerged that the network was led by Abdul Qadeer Khan, the father of Pakistan 's nuclear program. Khan was sacked, but later pardoned due to his role in developing Pakistan 's nuclear bomb, reports the AP.