Belgian Prime Minister Guy Verhofstadt said Monday he plans to hold talks with Gaz de France SA and utility company Suez SA to seek concessions on their French government-backed merger plan. Speaking after a meeting with President Jacques Chirac in Paris, Verhofstadt said he had told the French leader that a GDF-Suez tie-up should not prevent Belgium from opening its gas and electricity markets to more competition. 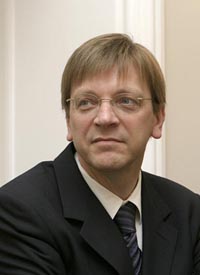 Verhofstadt also said the two Paris-based companies would likely have to sell off assets in order to meet that requirement. The GDF-Suez merger plan was announced by the French government last month just days after Italian power company Enel SpA said it might launch a takeover bid for Suez.

Suez owns Electrabel, the Belgium's largest power company, and GDF holds a sizable stake in its nearest domestic rival, SPE. Verhofstadt said last week that it would be unacceptable for one company to control 90 percent of his country's electricity market. The Belgian energy regulator is also concerned about the country's nuclear plants coming under French control, according to press reports.

A final deal might have to include "a sell-off of assets in the nuclear domain," Verhofstadt said Monday, adding that his government was seeking to "open the electricity and gas markets in Belgium and to have several operators, as is already the case in telecommunications."

Verhofstadt said he planned to meet senior GDF and Suez officials on Tuesday and Wednesday. The European Commission has been pressing Belgium to increase competition in its electricity and gas markets and has said that energy deals will receive close scrutiny by EU antitrust regulators, reports the AP.