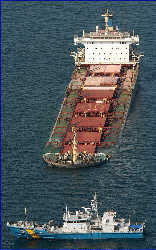 The Chinese vessel, which was carrying iron ore, sank immediately. A nearby vessel rescued five of the 17 crew members, while three were found dead and the nine others remained missing, the coast guard said.

One helicopter and 29 boats were searching the area for the missing, it said.

The South Korean cargo ship sustained minor damage and all its crew were safe, the coast guard said.

"The sunken vessel is presumed to have not recognized the anchored vessel and collided with it," it said, reports the AP.