72 bodies were found in Iraq

Iraqi police on Tuesday reported they had found at least 72 bodies killed by gunshots, most bound hand and foot, in a gruesome wave of apparent sectarian reprisal killings over the past 24 hour. Sixty-nine corpses were found in the capital and three in the northern city of Mosul , police reported. 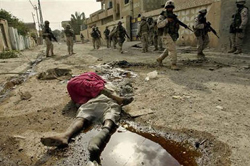 72 bodies were found in Iraq

The timing of the killings appeared related to the car bomb and mortar attacks in the Shiite Sadr City slum in east Baghdad on Sunday in which 58 people died and more than 200 were wounded. The sectarian violence marked the second wave of mass killings in Iraq since Feb. 22 when bombers destroyed an important Shiite Muslim shrine in Samarra , north of the capital.

The latest report was of 14 bodies handcuffed, dressed only in underwear and shot discovered in southeast Baghdad shortly before noon , according to police Lt. Bilal Ali. Dr. Baha-Aldin al-Bakri, at Mosul 's Jumhouri Hospital , said three corpses with gunshot wounds had been brought in by police.

Police also found the bodies of 15 men in an abandoned minibus, their hands and feet bound, and shot in the head and chest. The discovery was made on the main road between Amariyah and Ghazaliyah, two notorious, mostly Sunni west Baghdad neighborhoods not far from where a minibus containing 18 bodies was discovered last week.

The bodies of a least 40 other men were found discarded in various parts of the capital, al-Mohammedawi said. All had been shot and many were also bound hand and foot. The bodies were found in both Sunni and Shiite areas, many of them among Baghdad 's most dangerous neighborhoods, said al-Mohammedawi.

The grim finds underscored fears that Sunday's deadly explosions in a Shiite slum would unleash a new round of sectarian killing between Iraq 's majority Shiite Muslims and minority Sunnis. A number of the bodies including four strung-up from electricity pylons were discovered in Sadr City , reports the AP.