South Korea said Tuesday that plans to resume limited imports of American beef depend on the age of the latest U.S. cow discovered to have mad cow disease. "If the infected cow turns out to have been born before April 1998, when the South Korean government banned meat and bone meal, it will not influence the South Korea-U.S. beef import agreement in January," the Ministry of Agriculture and Forestry said in a statement. 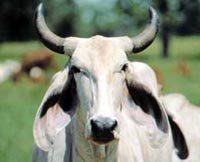 A cow in the southern state of Alabama tested positive for mad cow disease, the U.S. Agriculture Department said Monday, confirming the third case of the brain-wasting ailment in the United States . The cow did not enter the food supply for people or animals, officials said.

The cow was believed to be about 10 years old, the U.S. Embassy in Seoul said in a statement, citing a preliminary examination of its teeth. If that age is confirmed, it means that the latest outbreak won't affect South Korea 's plan to resume imports of American beef.

However, the ministry said it would wait until the U.S. definitively determines the cow's age before deciding on whether to go ahead with its planned resumption of U.S. beef imports. The results were expected before Friday, when the ministry said it plans to hold a briefing for reporters on the issue.

South Korea said in January it planned to resume limited U.S. beef imports by the end of this month after reaching an agreement with the U.S. to relax a two-year ban triggered by mad cow fears. Imports to South Korea will be limited to boneless meat from cattle under 30 months old. Seoul is concerned that some material inside bones, including marrow, could be dangerous.

South Korea was the third-largest foreign market for American beef, after Japan and Mexico , when it shut its doors to U.S. meat in December 2003, after the first reported U.S. case of mad cow disease.