China's prime minister has closed the annual parliament session with a vow to push ahead with economic reform while improving the lives of poor farmers. 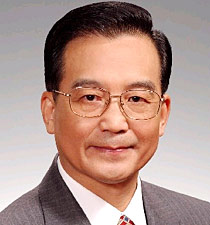 Wen Jiabao also offered to open direct talks with the government of Taiwan.

One of the Chinese prime minister's greatest talent is his ability to empathise.

As he stood before a television audience of hundreds of millions on Tuesday, Mr Wen told them that he felt their pain.

In particular he was talking to China's seven hundred million peasant farmers.

He promised to stop the rampant illegal seizure of their land for development, and to close the huge gap between the rich cities and the poor countryside.

But when it came to concrete measures he was far less clear.

Asked if he supports giving peasants legal title to their land, he said China's current system of collective ownership was still the best.

For Taiwan there were threats and conciliation.

He accused Taiwan's president of brazenly provoking China by intensifying efforts to make the island independent. At the same time he offered direct peace talks and promised that China had no desire or intention to swallow, Taiwan, reports BBC news.