Suicide truck bomb ripped through a line of vehicles waiting at a checkpoint Friday in Fallujah and killed at least seven civilians, while authorities in the capital discovered the bodies of six more men who were blindfolded, handcuffed and shot in the back of the head, police said. 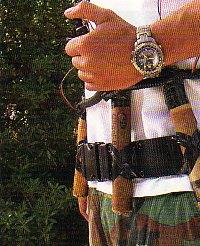 A powerful bomb hit a U.S. tank in east Baghdad , setting it afire and blowing off the treads, police said. The American military confirmed a tank was attacked but gave no further information. It was not known if there were any casualties.

And a policeman in Tikrit died disarming a roadside bomb, when a second explosive device detonated, also wounding two others.

Violence continued on the Muslim sabbath a day after the U.S. military said it planned to start moving thousands of detainees out of Abu Ghraib prison to a new lockup near the Baghdad airport within three months. The plan calls for the notorious facility to be handed back to Iraqi authorities as soon as possible.

Abu Ghraib had become perhaps the most infamous prison in the world, known as the site where U.S. soldiers abused some Iraqi detainees and, earlier, for its torture chambers during Saddam Hussein's rule.

The sprawling facility on the western outskirts of Baghdad will be turned over to Iraqi authorities once the prisoner transfer to Camp Cropper and other U.S. military prisons in the country is finished. The process will take several months, said Lt. Col. Barry Johnson, a U.S. military spokesman in Baghdad .

Abu Ghraib currently houses 4,537 out of the 14,589 detainees held by the U.S. military in the country. Iraqi authorities also hold prisoners at Abu Ghraib, though it is not known how many.

The U.S. government initially spoke of tearing down Abu Ghraib after it became a symbol of the scandal. Widely publicized photographs of prisoner abuse by American military guards and interrogators led to intense global criticism of the U.S. war in Iraq and helped fuel the Sunni Arab insurgency.

But Abu Ghraib was kept in service after the Iraqi government objected. Planning for the new facility at Camp Cropper began in 2004, Johnson said.

But the Iraqis were all but certain to use Abu Ghraib as a jail for some time at least, because they do not have the money to build new ones.

The Iraqi Cabinet announced Thursday that it hanged 13 insurgents, the first executions of militants since the ouster of Saddam.

The announcement listed the name of only one of those hanged, Shukair Farid, a former policeman in the northern city of Mosul , who allegedly confessed that he had worked with Syrian foreign fighters to enlist fellow Iraqis to kill police and civilians.

"The competent authorities have today carried out the death sentences of 13 terrorists," the Cabinet announcement said.

Farid had "confessed that foreigners recruited him to spread the fear through killings and abductions," the government said.

A judicial official said the death sentences were handed down in separate trials and were carried out in Baghdad . The official spoke on condition of anonymity, fearing insurgent retribution.

In September, Iraq hanged three convicted murderers, the first executions of any convicts since Saddam's ouster in April 2003. The men, considered common criminals rather than insurgents, were convicted of killing three police officers, kidnapping and rape.

Capital punishment was suspended during the formal U.S. occupation, which ended in June 2004, and the Iraqis reinstated the penalty two months later for those found guilty of murder, endangering national security and distributing drugs, saying it was necessary to help put down the persistent insurgency.

The authorities also wanted to have the option of executing Saddam if he is convicted of crimes committed by his regime. Under the former dictator, 114 offenses were punishable by death.

Saddam and seven co-defendants are on trial for allegedly massacring more than 140 people in Dujail, north of Baghdad , after an assassination attempt against him there in 1982.

Death sentences must be approved by the three-member presidential council headed by President Jalal Talabani, who opposes executions. In the September hangings and again in the Thursday executions, Talabani refused to sign the authorization himself but gave his two vice presidents the authority.

Police reported finding five more blindfolded, handcuffed bodies killed execution-style, three of them near Fallujah, west of Baghdad , and two others in the Sadr City Shiite slum in the east of the capital.

The U.S. military reported the death of another Marine, killed Wednesday in insurgency-ridden Anbar province. At least 2,305 U.S. service members have died since the war started in March 2003, according to an Associated Press count.

In political developments, Shiite politicians said they asked President Talabani, a Kurd, to convene parliament March 19, one week past the constitutional deadline, marking an apparent compromise in the battle over a second term for Prime Minister Ibrahim al-Jaafari, a Shiite.

Shiite legislators Khaled al-Attiyah and Khudayer al-Khuzai told The Associated Press that the request for parliament to convene had been delivered to Talabani. On Sunday, the president sought to issue a decree that would have called the parliament into session on March 12, as spelled out in the constitution.

But the move was blocked when one of two vice presidents a Shiite initially refused to co-sign the decree as required by law. Vice President Adil Abdul-Mahdi relented Wednesday, but the issue still faced heated opposition from other Shiite political forces, especially in the powerful bloc loyal to radical cleric Muqtada al-Sadr, reports the AP.