A teacher who compared U.S. President George W. Bush's State of the Union address to speeches made by Hitler defended his lecture on Tuesday, saying he was trying to encourage students to think. 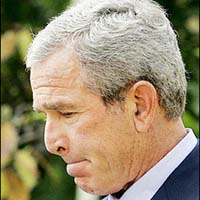 "My job as a teacher is to challenge students to think critically about issues that are affecting our world and our society," Jay Bennish said on NBC's "Today Show."

Bennish is on paid leave from Overland High School while Cherry Creek School District investigates whether his Feb. 1 lecture violated a policy requiring that balancing viewpoints be presented in classes.

The district postponed a meeting with Bennish scheduled for Wednesday, citing unspecified phone calls it received after his appearance on radio and television programs Tuesday.

"I can't comment on the content of the calls, but we want to hear anything anyone thinks is relevant to the investigation before we reach a conclusion," district spokeswoman Tustin Amole said in an e-mail to The Associated Press.

Bennish's lawyer did not immediately return phone messages from the AP.

A student recorded part of the lecture in Bennish's world geography class and took it to Denver radio station KOA, which played excerpts on a talk show.

Bennish told "Today" the excerpts that have been broadcast aren't representative of the full lecture.

"This is 20 minutes out of a 50-minute class. The rest of the class provides the balance," he said.

On the recording, Bennish told the students that some of Bush's speech "sounds a lot like the things that Adolf Hitler used to say. We're the only ones who are right, everyone else is backwards and our job is to conquer the world and make sure that they all live just like we want them to."

Later in the recording, Bennish said he was not claiming Bush and Hitler were the same, "but there are some eerie similarities to the tones that they use."

Bennish said no parents including the family of the student who recorded the lecture have complained to him. He said all the students' parents had seen his syllabus and that school officials had approved it.

"My job as a social studies teacher is to argue alternative perspectives and viewpoints so that students are aware of those point of views. They do not necessarily reflect my own views. They are simply thrown out there to encourage critical thought," he told "Today", reports AP.