The top diplomat for Moldova's breakaway Trans-Dniester warned Tuesday of a growing political crisis, as Ukraine tightened its border rules and turned away some cargo from the separatist region. 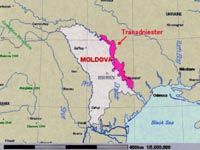 Ukraine, under pressure from the European Union and Moldova, last week instituted new regulations aimed at curbing smuggling from Trans-Dniester, which has largely run its own affairs since breaking away from Moldova in a war in the 1990s.

The rules now require all cargo to be cleared by Moldovan customs officers, and some cargo from Trans-Dniester has already been blocked at the Ukrainian border.

"Unfortunately, I should warn everyone that in the next days... we'll see a growing political crisis," Valerii Litskai, foreign minister of the unrecognized region, said in a live interview with Ukraine's TV5 channel during a visit to Kiev.

Both Trans-Dniester and Russia, which has a 1,800-strong military presence in the Russian-speaking region, have accused Ukraine of trying to pressure it.

The Moldovan government and Trans-Dniester have held on-again, off-again talks on the region's status. Ukraine and Russia have helped to mediate the negotiations, and Moldova has called on the United States and the European Union to join.

Trans-Dniester's president, Igor Smirnov, said Tuesday that there was no point in holding mediation talks, given the current impasse.

"Ukraine is moving from being a guarantor state and mediator to a party to the conflict, joining in the blockade (imposed) by ... Moldova," Smirnov was quoted, reports Interfax.