Thousands protest against Bush and cartoons in Pakistan 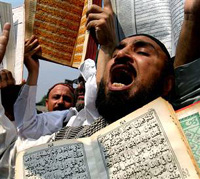 Thousands protest against Bush and cartoons in Pakistan

Thousands rallied across Pakistan Friday against cartoons of Prophet Muhammad and a planned U.S presidential visit after radical Islamic groups called a strike that shut shops and businesses in several major cities.

At Chaman, a southwestern town on the Afghan border, between 4,000 and 5,000 people protested peacefully, an Associated Press reporter saw. They shouted, "Go Back Bush! Bush, Dog!" and "God is Great!"

A similar rally by about 3,000 people was held in the northwestern city of Peshawar.

U.S. President George W. Bush was due to arrive late Friday on an overnight visit to the Pakistani capital, Islamabad, on the final leg of a South Asian tour, reports the AP.