The European Union's presidency has welcomed a decision by Montenegro 's parliament to set a formal date for a referendum on its future relationship with Serbia . "The referendum process has thus been provided with the necessary legitimacy and sustainability," the EU said in a statement released late Thursday by Austria , which currently holds the rotating presidency of the 25-nation bloc. 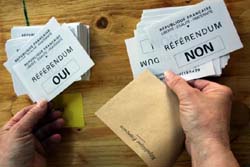 Montenegro 's parliament on Thursday formally set May 21 as the date for a referendum to determine the fate of the tiny republic's union with Serbia , following weeks of EU mediation between Montenegro 's pro-independence government and opposition leaders who favor keeping close ties with Serbia .

In the statement, the EU also urged all Montenegrin political forces to continue to cooperate with each other to ensure that the referendum's organization and conduct was accepted throughout the country. "This is crucial to the future political stability of Montenegro and the region as well as to the pace of its movement toward the European Union," it said, reports the AP.