An American linked to Britain's Princess Beatrice met Tuesday with authorities who are investigating whether he violated the conditions of his probation in connection with charges stemming from the death of a fellow student. 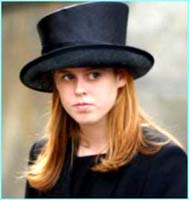 Paolo Liuzzo, 24, was originally charged with manslaughter in the 2002 death of Johnathan Duchatellier during a brawl when both were students at the College of the Holy Cross. The Woodbury, New York-native later pleaded guilty to reduced charges of assault and battery, and was sentenced to three years' probation and 100 hours of community service.

Liuzzo's Boston-based lawyer, Joseph Oteri, said his client his scared about what may happen to him if it is determined that he violated his probation.

"He lives with this every day of his life," Oteri said. "He's terrified that he screwed up and he's going to go jail."

Liuzzo has refused to comment on his relationship with the 17-year-old Princess Beatrice, who is fifth in line to the British throne.

Oteri said he assumed his client came to attention of probation officers after British tabloid newspapers erroneously reported that Liuzzo was injured while on a ski vacation with Beatrice, her father, Prince Andrew, and her mother Sarah Ferguson, the Duchess of York, in Verbier, Switzerland.

Oteri said Beatrice and her family actually helped Liuzzo after he was injured on a ski vacation with another friend, not Beatrice, in France, about two weeks ago.

On Tuesday, probation officers issued Liuzzo a notice for alleged violations of his probation, and scheduled a hearing for March 21, Oteri said.

Oteri said the notice was based on two possible technical probation violations: failure to confirm his place of residence and his employment in London, and taking the ski trip to France.

According to Oteri, Liuzzo provided a letter from his employer in London to the court, but he was also required to provide supporting information, such as a pay stub and a lease agreement for his apartment.

Oteri said Liuzzo injured his shoulder during the French ski trip and was taken to a hospital, where he underwent surgery. Liuzzo was unable to pay for the hospital visit, Oteri said, because all he had was an American Express card, which the hospital did not take.

During the ordeal, Liuzzo also lost his passport and called his brother in the United States to help him. After leaving the hospital, Liuzzo went to the U.S. Embassy in Bern, Switzerland, where Liuzzo received a temporary passport and called Beatrice, who was vacationing in the Swiss resort of Verbier, for help, Oteri said.

"Fergie said to him 'Come here, we'll take care of you,"' Oteri said.

Oteri said Liuzzo went to Verbier, where a doctor examined him. Beatrice's family and Liuzzo then flew to London, where he was admitted to a London hospital where he had another surgery.

He flew home to New York on Sunday.

The lawyer said he did not believe that Liuzzo had violated his probation, but "technically he may have."

The hearing on March 21 will be before a Superior Court judge. The court has a range of options should the judge find that Liuzzo violated his probation, including continuing his probation, imposing stricter conditions or putting him in jail.

Duchatellier, 19, was killed in May 2002 after he, Liuzzo and several other students got into a fight at Liuzzo's off-campus apartment in Worcester, reports AP.