A delegation of top Tamil rebels arrived in Colombo Friday en route to Geneva where they will hold their first direct talks in nearly three years with the Sri Lankan government. The government, meanwhile, released from prison four members of the Sea Tigers, the naval wing of the Liberation Tigers of Tamil Eelam, said Helen Olafsdottir, a spokeswoman for a European cease-fire monitoring team. 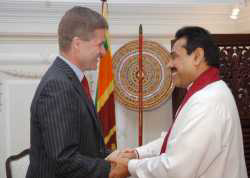 Their release in the northeastern port town of Trincomalee after years in prison was seen as a gesture of goodwill ahead of the Feb. 22-23 peace talks. Earlier, an official at Sri Lanka's only international airport said the four-member rebel negotiating team arrived at the airport from Kilinochchi, the rebels' de facto capital, abroad a Sri Lankan air force helicopter. The official cannot be named because he is not authorized to talk to the media.

Separately, seven more junior rebel officials traveled by road and joined the four others at the airport. The team, headed by S. P. Thamilselvan, the political head of the rebels, is scheduled to leave for Dubai , United Arab Emirates , en route to Geneva , abroad a Sri Lankan airlines flight later Friday.

The Geneva talks come as a Norwegian-brokered cease-fire has come under huge strain because of escalating violence. The Tigers accuse the government of backing a breakaway faction and want officials to disarm that group. The Geneva talks are to focus primarily on that issue.

The government denies backing the splinter group and in turn blames the rebels for many of the deaths of more than 150 people, including 81 soldiers, since Dec. 4, when violence flared up in the northeast.

The rebel movement split in 2004 when an eastern-based military commander named Karuna broke away with 6,000 fighters. The rebellion was suppressed by the mainstream rebels, but Karuna and several other leaders managed to escape and are known to operate in eastern Sri Lanka .

The Tamil Tigers launched a violent campaign in 1983 to create a separate state for ethnic minority Tamils in the northeast, accusing the majority Sinhalese of discrimination. The civil war killed 65,000 people before the cease-fire was signed in 2002. Peace talks broke down a year later over rebel demands for wide autonomy, reports the AP.