The Republican national chairman created a furor this week when he suggested Sen. Hillary Rodham Clinton is too "angry" to win the White House in 2008. And to hear Republicans tell it, Clinton is just one of many Democrats with an anger management problem. 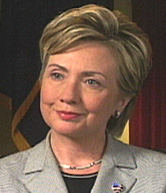 Former Vice President Al Gore is angry. So is Senate Minority Leader Harry Reid. The party is held hostage by the "angry left."

In recent months, Republican operatives and officeholders have cast the Democrats as the anger party, long on emotion and short on ideas. Analysts say the strategy has been effective, trivializing Democrats' differences with the Republicans as temperamental rather than substantive.

"Angry people are not nice people. They are people to stay away from. They explode now and then," said George Lakoff, a linguistics professor at the University of California at Berkeley. His book "Don't Think of an Elephant" has become something of a Bible for Democrats trying to improve their communication with voters.

Political history is dotted with failed presidential candidates perceived by the voters as too angry _ think of Democrat Howard Dean's famous scream in 2004, or Bob Dole admonishing his fellow Republican George H.W. Bush in 1988 to "stop lying about my record." Both parties' most revered figures in recent years, Ronald Reagan and Bill Clinton, projected optimism and hope.

The latest example of the anger strategy came Sunday, when Republican National Committee chairman Ken Mehlman said on ABC television that Clinton "seems to have a lot of anger." He cited comments she made in Manhattan's Harlem neighborhood on Martin Luther King Day in which she likened the Republican-led House of Representatives to a "plantation" and called the Bush administration "one of the worst" in history, reports AP.