China is concerned about the threat to the safety of navigation in the South China Sea in connection with the incident that occurred to US destroyer John McCain, Chinese Foreign Ministry Spokeswoman Hua Chunying said at a briefing on August 21. 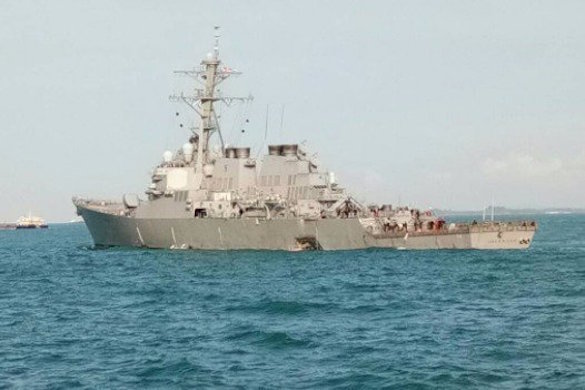 Early in the morning of August 21, the US destroyer John McCain, while heading to the port of Singapore, collided with the Alnic MC tanker, which was traveling under the Liberian flag, in the Malacca Strait. As a result of the incident, five US navy men were hospitalised with various injuries, while ten other members of the crew of the destroyer were reported missing. The destroyer was damaged, but arrived at Changi naval base in Singapore.

The Alnic MC tanker was damaged above the waterline and was able to continue navigating. None of the crew was injured.

During the briefing, Hua Chunying said that Beijing had not received requests for assistance in search and rescue operations. At the same time, the Chinese authorities hope that all the missing people will be found.

The hole in the rear side of the John McCain destroyer is three meters in diameter. Several compartments of the vessel were flooded as a result of the incident, the AP reports.