Trade restrictions between Russia and Turkey have been lifted. Vice premiers of the two states - Arkady Dvorkovich and Mehmet Shimshek - signed a relevant agreement on Monday, May 22. It is worthy of note that Turkey is currently hosting the summit of the Organization of the Black Sea Economic Cooperation. 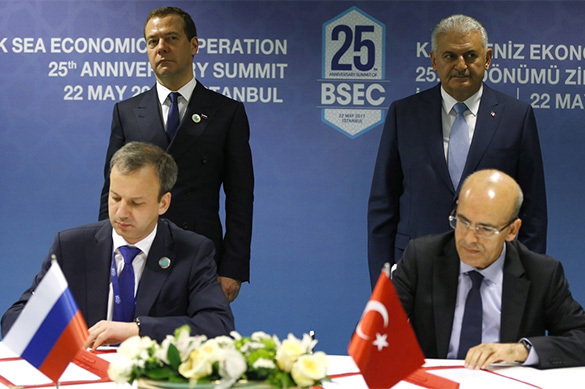 Russian Prime Minister Dmitry Medvedev and his Turkish counterpart Binali Yildirim attended the ceremony to sign the joint statement on lifting the restrictions.

Medvedev has already held talks with Yildirim; he is now expected to have a meeting with Turkish President Recep Tayyip Erdogan.

It became known at the summit that Russia would allocate about a million dollars for joint projects with countries of the Black Sea Economic Union. The projects will embrace such industries as aircraft building, machine building, chemical industry and metallurgy.