Media has reported that China had dispatched troops to the North Korean border. 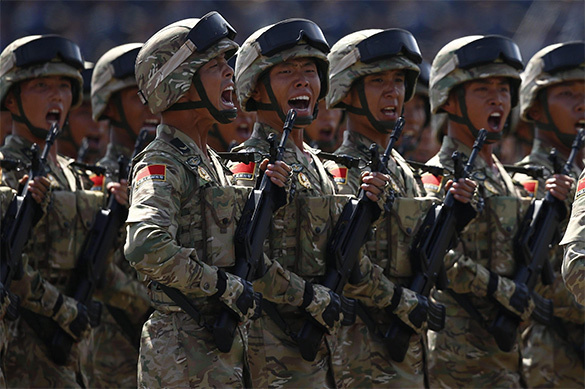 Command of the Chinese People's Liberation Army has started deployment of 150,000 military at the North Korean frontier, as the South Korean Chosun agency has reported, in particular.

While according to the Japanese Sankei Shimbun, the decision to dispatch army has been taken given threats that the US would carry out a preventive strike against North Korea, repeating scenario they implemented in Syria.

As it became known before, the US Navy carrier strike group was dispatched to the North Korean coast: the USS Carl Vinson aircraft carrier accompanied by two cruisers and six destroyers equipped with 570 Tomahawk cruise missiles departed from a Singaporean port Saturday evening. The decision was taken 'in response to latest provocations from North Korea', as the White House claimed.

'The source of news is the South Korea Chosun agency, which is famour for its fakes. Yes, namely they made up execution of a Minister from anti-aircraft guns in the city centre,'a well-known publicist Ruslan Karmanov wrote on his VK page.

According to him, the agency used to lie about China before, as news about China's deploying troops in the North Korean city of Rason was published, which turned out to be compete lie. But finanz.ru (where news about the troops appeared) finished the situation off with changing the source of news in the second abstract: 'given data of the Japanese Sankei Shimbun.' Then they turn to 'correct approach', saying 'after Trump's ultimatum, China has decided to attack Korea,' Karmanov noted.

Which is also a lie. As in course of the meeting leaders admitted 'how dangerous the situation has become', while Xi agreed that 'it's time to act regarding North Korea', as the US State Secretary Rex Tillerson claimed in an interview with the CBS News. 'Leaders admitted' and 'Xi agreed that it's time to act' are present only in the US State Secretary's speech, and nowhere else. As a result, we have quite a traditional false story,' Karmanov concluded.