19:16
Putin grants Russian citizenship to Edward Snowden
19:00
Consul of Japan caught red-handed for espionage in Russia
18:48
The status of the special operation in Ukraine likely to be changed after referenda
13:57
Thirteen killed in mass school shooting in Izhevsk, Russia
19:06
Kremlin responds to rumours to call-up 1.2 million people
15:18
Kremlin explains status of Ukraine's attacks on Donbas after referenda
14:47
Erdogan: Ukrainian politician Viktor Medvedchuk left for Russia from Turkey
14:27
Russian Defense Ministry clarifies professions exempt from partial call-up
21:31
Lavrov at UN Security Council: It is you who turn a blind eye on Kyiv's war crimes

Ukrainian President Petro Poroshenko has approved sanctions against five banks with the Russian capital, the press service of the Ukrainian president said. 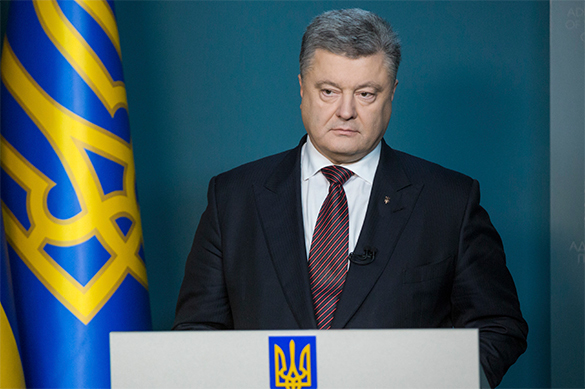 It goes about Sberbank, VS Bank, Joint Stock Commercial Industrial and Investment Bank, OJSC Vneshtorgbank, and OJSC BM Bank. Restrictive measures against the organizations will be in effect for a year.

Poroshenko instructed the Cabinet of Ministers and the National Bank to take urgent measures to prohibit the placement of funds of state enterprises, institutions, organizations and economic structures in the sanctioned banks.

"Ukraine's Foreign Affairs Ministry shall inform competent authorities of the European Union, the United States and other countries about the imposition of sanctions and raise the issue of applying similar restrictive measures against relevant legal entities," the statement also said.

Earlier, the National Bank of Ukraine proposed imposing sanctions against Ukrainian "subsidiaries" of Russian banks. The "black list" included Sberbank, VTB, BM-Bank, Prominvestbank and VS Bank. It was proposed these banks should not be allowed to wire their funds outside Ukraine.

Russian Foreign Minister Sergei  Lavrov stated that the Ukrainian authorities would "shoot themselves in the leg" if they wanted to create problems for those financial structures.

A Pravda.Ru source close to the Russian Central Bank said that such an option was being analyzed to calculate possible losses and consequences for the economy of Russia and its partner countries.