A video of three OSCE vehicles escaping from Donetsk has recently appeared on the Internet. The author of the video makes ironic comments noting that OSCE officers were in a hurry to escape from the city. 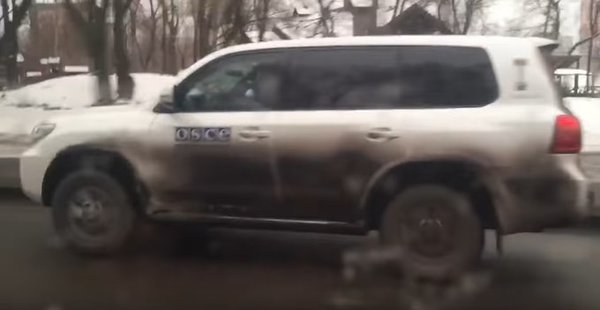 "This is our brave OSCE mission in Donetsk. Here's one, there's another and there's a third one - all are leaving - with a trailer, packed to go," the author of the video says.

The footage shows the vehicles overtaking other cars, apparently being in a hurry to leave the city.

Spokeswoman for the Russian Foreign Ministry Maria Zakharova commented on the work of the OSCE mission:

"There is such a job - not to notice tanks," she said.

Later, however, the monitoring mission of the OSCE has documented the presence of several Ukrainian tanks in Avdiivka. The observers reported the presence of four T-64 tanks of the Ukrainian Armed Forces. The tanks were parked near a block of flats in Avdiivka. Ukrainian BM-21 volley fire systems were also registered. The systems were seen traveling to the east in the direction of the settlement of Netaylovo (to the north-west off Donetsk).

Ukrainian military, however, were quick to comment that the tanks were simply parked near the buildings.

Maria Zakharova announced on February 3 that Moscow was concerned about the shelling of civilians in the Donetsk region.

"This barbarous raid can not be justified. Kiev's actions violate not only the 1949 Geneva Convention on the protection of civil population during wartime but all moral norms as well. Only vandals can bomb a city while it's sleeping, destroying entirely blameless people. We have no other definition for the people who conducted this night sortie," she said in a press briefing.