Ankara-Moscow-Tehran may cast the West out of region

The Americans express skepticism about success of the Russia-Turkey-Iran efforts in settlement of the Syrian crisis, as negotiations have been held in Moscow without the US. According to the New York Times, absence of the Western countries means that Assad will be let rule further despite Obama's declaring him illegitimate five years ago. It proves that Washington has lost its leverage in geopolitics. 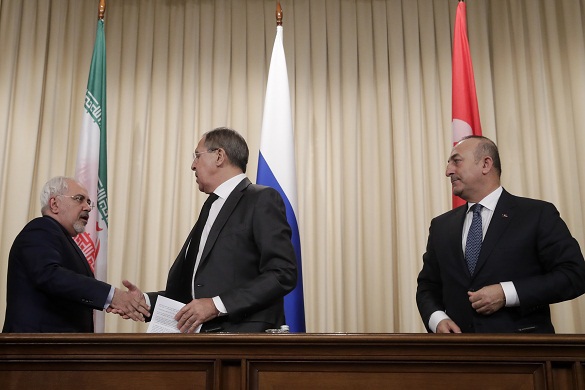 Shamil Sultanov, President of the Russia-Islamic World Centre for Strategic Studies, commented Pravda.Ru on the issue.

Current negotiations of Tehran, Moscow and Ankara relate to local situation in Aleppo. There are pitfalls connected with the Sunni population of the city. On the other hand, a stronghold in Idlib is discussed. They do not discuss postwar Syria. The war has not ended yet, it will be continued. And what has happened with Palmyra evidences it. There are a lot of various forces in the country, that do not want to go the length of such stabilization. But in case in some years it will be reached, a question Who will be restoring Syria will be on agenda. The case is about 100-150bln dollars. Thus, some agreement with global community will be needed. It may be the West, or countries of the Persian Gulf or someone else, but not Iran or Russia all alone.

That is absolute propaganda of a person who adheres to anti-Turkish stand. Erdogan's shift to Russia has been connected with the fact that the Kurdish threat has become more significant for Ankara rather than Assad's regime. That is why so important triangle of Ankara-Moscow-Tehran has been formed.

Beside that, Ankara, is interested in Iran's and Russia's staying main hydrocarbon suppliers to Turkey and on attractive terms. Thus, the Kurdish factor, Assad's regime and economic prospects led to creation of this quite promising triangle which may cast the West out of this region at all.

But it does not mean that the situation will not change. There are contradictions in this triangle. However, negotiations became possible as all the three parties agree that Syria should be an independent state.

Nobody speaks of Iranian interests in Syria. What are they?

For Iran Syria is the most important component of Tehran's regional sphere of influence. Making use of catastrophic US fails in Iraq, Tehran managed to create its own sphere of influence and even a pivot in entering the so-called Shia half-moon - Iraq, Syria and Lebanon. Plus outposts in other countries, as Bahrain, Oman and other.

Given the sphere of influence Iran now may be defined as a regional superpower. And fall of Bashar al-Assad's regime would severely damage this influence.

Second is oil supplies of Iraq and Iran, these are about 30-35% of the global oil reserves. And when situation is stabilized and a pipeline is laid to the Mediterranean Sea, it will mean that Tehran will become one of the key players at the hydrocarbon market.

Read article on the Russian verion of Pravda.Ru