Unaffiliated deputy of the Verkhovna Rada of Ukraine Vladimir Parasyuk believes that the killer of Russian Ambassador Andrei Karlov in Ankara committed a heroic act. 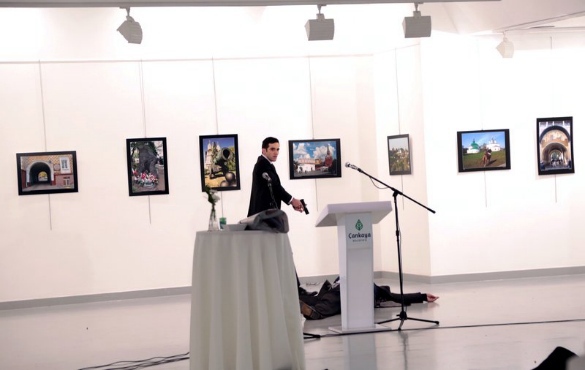 "When a person is ready to sacrifice his life, go to extremes for an idea, for truth, then one can say with confidence that this person is a HERO!" Parasyuk wrote on Facebook, posting the photo of the armed gunman, who killed the Russian ambassador by shooting him in the back.

Russia's Ambassador to Turkey Andrei Karlov was killed on Monday evening, December 19, at the Gallery of Modern Art in Ankara. The attacker was identified as Mevlut Mert Altintas, a Turkish police officer, who was killed by Turkish law-enforcers soon afterwards. Three other people were wounded in the terrorist attack.

Noteworthy, Ukrainian President Petro Poroshenko expressed his condolences to victims of the most recent terrorist attack in Germany, when a truck drove into a crowded Christmas market, killing 12 and injuring dozens. At the same time, Poroshenko did not comment on the assassination of the Russian Ambassador to Turkey.

The majority of world leaders and representatives of international organizations have condemned the killing of the Russian diplomat.