Russia and EU to unite against Donald Trump?

The head of EU diplomacy Federica Mogherini said in an interview with The Wall Street Journal said that the EU and Russia could find common grounds on a number of international issues to join forces to counter future policies of the Donald Trump administration. 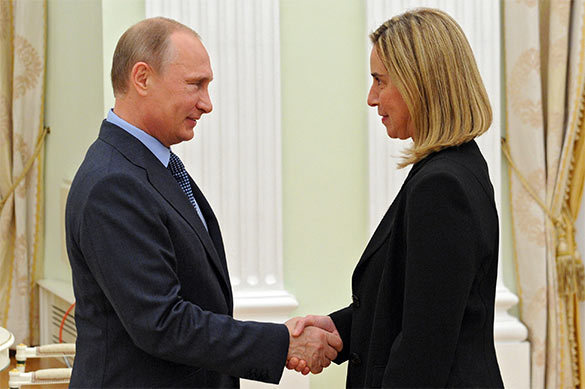 Moghernini, speaking about the fate of the nuclear agreement with Iran under the new US president, noted that Washington's slightest derogation from those agreements would raise serious concerns in Moscow.

"In a transactional manner...case by case, you will find issues where I wouldn't be surprised to see the Europeans and the Russians on the same side - Iran deal, Middle East peace process, possibly the role of the UN," Mogherini told The Wall Street Journal.

Earlier, Federica Mogherini said that the European Union did not intend to change its position on Russia, even if it was going against new US policies. Pravda.Ru requested an expert opinion from Deputy Director of the Institute of History and Politics, Vladimir Shapovalov.

"Can Russia and the EU unite against Trump?"

"The alliance between the European Union and Russia against Trump is unlikely in this context. Yet, the EU and Russia could form a common position on certain issues, such as the Iranian problem, for example. It is possible to imagine that this could be a position that would differ considerably from the stance of the new US administration.

"There were such precedents before. In 2003, when the US attacked Iraq, Russia and China took a similar position along with leading European countries, such as France and Germany. Was it possible to say back then that the EU and Russia were in a joint alliance against the United States? Of course not, bit their positions coincided at a certain stage on a particular issue.

"This situation may repeat again today too. In addition to Iran, Russia and the EU could take a common position on China. This does not mean that there is a strategic alliance being formed between Russia and Europe against the United States. This is absolutely impossible, because Europe is, in fact, deprived of subjectivity in international relations. Europe is a junior partner of the United States.

"Additionally, the Trump administration will revise the tough approach to relations with Russia. In this situation, the positions of Donald Trump and Vladimir Putin are a lot closer to each other than the positions of Russia and Europe and the USA and Europe on many important issues.

"Trump is not a favorite among most of the political elites of Europe. I hope that the USA will soon change its policy on Syria. If the USA does, then the EU will do the same too," the expert told Pravda.Ru.