US Secretary of State John Kerry shared a childhood memory about his meeting with Soviet soldiers in the mid-1950s. 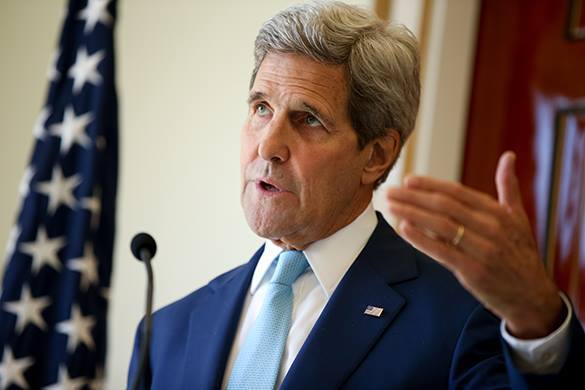 During a ceremony, at which Kerry was awarded with a highest award "For Services to the Federal Republic of Germany", the US Secretary of State said that he was studying in Switzerland when he was 12 years old, newsroomamerica.com reports.

One day he took an opportunity to travel from Frankfurt to Berlin on an American military train. The train was supposed to cross the territory of East Germany. Passengers in the train were not allowed to open window blinds. Kerry took six cans of Pepsi and a few comic books that he bought in Frankfurt. He admitted that he had not slept all night and was just looking into the window.

"I stayed up all night because it was so exciting, and I'd peek out on the - through the window. And when we'd stop in various places along the way, the soldiers - the Russian soldiers would - Soviet soldiers would rap - come walking up and down to see that nobody got off the train, and they'd rap with their gun butt on the window for me to close the blind, because I was not allowed to be enjoying this moment of looking out where I was. And when we arrived at the station here in Berlin, the U.S. Army Band was there playing Stars and Stripes, American songs, because the city was of course divided into three - into four sectors," Kerry said.

He said that he had those moments memorized very well because he was very impressed by the difference between the eastern and the western part of the city.

Kerry also said that he once decided to ride a bicycle from the western part of the German capital.

"I felt a little scared. I felt this ominous darkness, this gray. Very few cars, not a lot of people running around, less bustle than there had been in the western side. And I felt this sort of darkness in a way that I said, you know what? I don't think it's such a good idea to be here. And I actually turned my bike around and I went back and went back into the American sector. And I remember, of course, when I told my dad about my great adventure, I was promptly grounded."

Noteworthy, in August 1961, at the peak of both the Cold War and the Berlin crisis, free travel between West and East Berlin was forbidden. Soon afterwards, all of West Berlin was surrounded by a concrete wall with checkpoints. The construction of the Berlin Wall came as violation of the Potsdam Agreement that provided for the free movement around the city. The Berlin Wall had become a symbol of confrontation between hostile blocs for many years ahead.