Poroshenko explains why he did not impose martial law in Ukraine

President of Ukraine Petro Poroshenko delivered a speech on the third anniversary of Euro-Maidan riots. Poroshenko spoke about the "internal Europeanization" of the country, civil society and the lives of ordinary Ukrainians. Poroshenko also explained why he did not introduce martial law in the country two years ago. 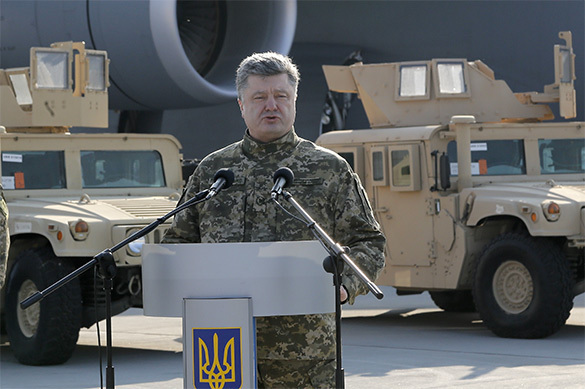 Poroshenko said that the revolution had reinstated the parliamentary-presidential model of government in Ukraine, made the political system in the country democratic and Europe-oriented. He also used the word combination  "internal Europeanization" of Ukraine, noting that it was very important to measure this indicator.

The Ukrainian leader admitted that two years ago he did not succumb to pressure to impose martial law under the conditions of "foreign aggression." "I was not thinking about myself - I was thinking about the country," Poroshenko said. He added that he was thinking about the need to preserve and strengthen the signs of European culture, namely the system of balances, political competition, rights and freedoms of Ukrainian citizens and above all - the freedom of speech," the Ukrainian Pravda wrote.

However, Poroshenko said that he did not see any progress in the development in the life of common Ukrainians. According to him, this is the only field in Ukraine that had not neared European standards three years after the revolution. The Ukrainian leader said that it was Ukraine's significant obstacle on the way to Europe. Poroshenko explained the lack of improvement in the field by the country's "need for defense."