The remains of Polish President Lech Kaczynski and his wife Maria were exhumed in the Polish city of Krakow 6.5 years after the plane crash near Smolensk, Russia, local media reported. 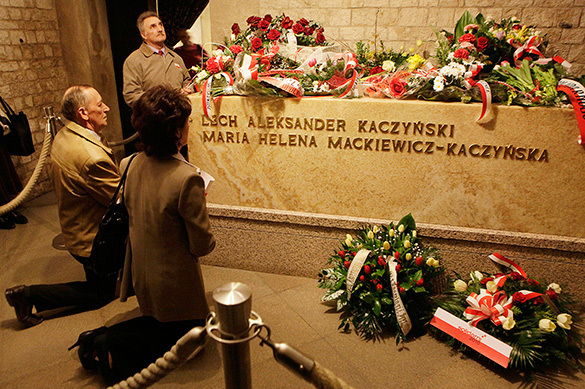 The remains of the late Polish president and his wife were exhumed from the sarcophagus in Wawel Royal Castle and then sent to the Centre of Forensic Medicine. The re-burial is scheduled for November 18.

The news about the exhumation became known in mid-October. The twin brother of the late Polish president, the leader of the ruling Polish party Law and Justice, Jaroslaw Kaczynski, gave his consent for the procedure. "This will be one of the first if not the first exhumation. After the bodies were delivered to Poland, there were no elementary actions conducted, such as inspections and autopsies. They lied that the procedures had not been conducted for sanitary reasons. At the same time, the bodies of all military men, who were killed in the course of their missions, were autopsied upon their delivery to Poland. What was happening after the air crash was one big scandal," Jaroslaw Kaczynski said.

The Tu-154 aircraft carrying Polish President Lech Kaczynski and a number of other senior Polish officials crashed on April 10, 2010 while landing in Smolensk. There were 96 people on board the aircraft, all of them were killed.

Over the past six years, the desire to establish Russia's guilt in the crash of the aircraft of the Polish president has evolved into obsessive idea for a number of Polish officials. They claim that it was flight control officers of the Smolensk airport that made the crash happen. Another Polish "theory" suggests that there was a bomb on board the aircraft.