Russia's state-of-the-art frigate of the Black Sea Fleet, the Admiral Grigorovich, armed with Caliber missiles, has set off to the Mediterranean Sea from the port of Sevastopol on November 3. The vessel is said to join the group of Russian warships off the coast of Syria, RIA Novosti reports with reference to a source in the law enforcement agencies of the Crimea. 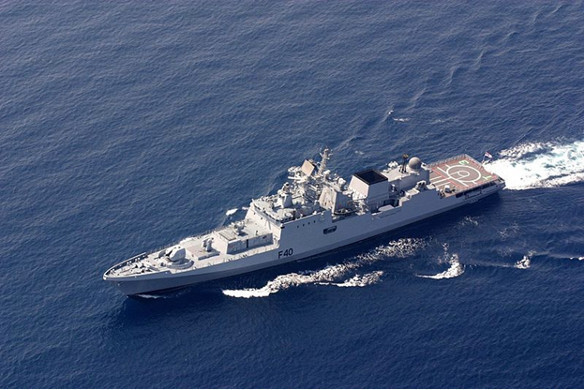 According to the source, the arrival of the frigate will mark "quite a significant enhancement" for the Mediterranean group of the Russian Navy. "The ship is versatile; she can struck missile blows on both surface and ground targets at large distances," the source said.

The Admiral Grigorovich will be integrated into the overall air defense system of the Russian group. The vessel will join other Russian warships in the Mediterranean Sea in two days.

Frigate Admiral Grigorovich arrived in Sevastopol in 2016 and joined the Black Sea Fleet of the Russian Federation. This is the lead ship of far sea zone, Project 11356. Patrol ships of this series have a displacement of about four thousand tons, develop the speed of up to 30 knots and have the cruising capacity of 30 days. The frigate is armed with Caliber-NK cruise missiles, Shtil-1 missile defense complex, A-190 artillery system (100-mm caliber), anti-aircraft artillery, torpedoes and can carry deck-based Ka-27 (or Ka-31) helicopters.