Russian ships led by the Admiral Kuznetsov aircraft carrier will not enter into the Spanish harbor of Ceuta because of the naval group's route change, the Russian embassy in Spain said Wednesday. 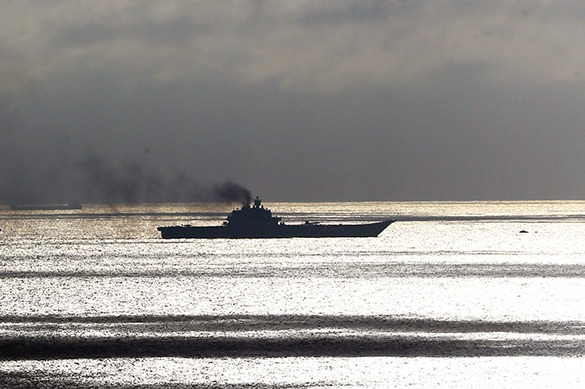 "We confirm that the ships will not enter the Ceuta port because the route has changed,"  stated the embassy official.

On October 15, the Russian Northern Fleet's press service said that a group of warships headed by the Admiral Kuznetsov, accompanied by the Pyotr Veliky battle cruiser, the Severomorsk and Vice-Admiral Kulakov anti-submarine destroyers, and support vessels, had been sent to the Mediterranean to hold drills and strengthen capabilities.

Pravda.Ru's political expert Alexander Chichin revealed the nature of the contrariety of Spain's policy on Russia.

Expert said that this decision is connected with NATO's attitude. Initially it all was referred to one tanker which was not an issue for Spain. Then they discovered that there was a whole fleet. Afterwards spanish realised that this fleet included aircraft carrier 'Admiral Kusnetsov', cruiser 'Pyotr Veliky' and antisubmarine aircraft carrier 'Severomorsk'.

That's why Spain had to refuse. At the moment spanish people say that they are very ashamed for not refusing straight away. They are disappointed that they have recieved NATO's warn.

It is worth mentiong that Spain could have got benefits from this proposal because the country needs money. These ships during only six days could make a great sum of money from Russia to Spain.

Spain had to choose between its international authoriy and its inner financial profits. Abandonnig the proposal, Russia saved Spain from resolving this kind of dilemma.