Ukrainian President Petro Poroshenko said that there was no real political alternative to the Minsk Agreement to resolve the conflict in the east of the country. 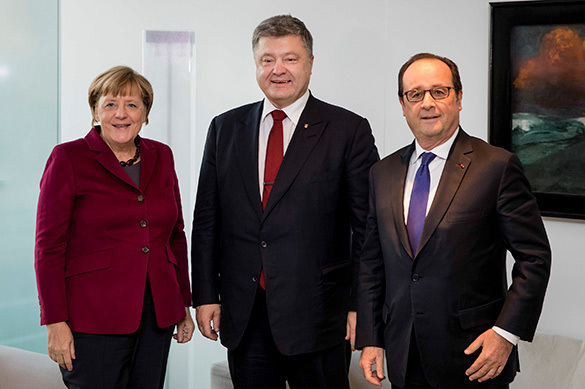 Poroshenko noted that those who suggest abolishing the Minsk Accords should put forward an alternative. "There are two alternatives: a military solution to the conflict and an open attack on the Russian Federation. I ask to compare military budgets and capabilities and take responsibility for future victims," Poroshenko told the UNN TV channel.

According to Poroshenko, the political forces against the Minsk Accords aim to give up the territories that Kiev does not have the control of, build a border there and practice the logic of territory in exchange for peace. "I want to disappoint those political forces and their supporters as they will get neither peace nor territories. Therefore, these statements are absolutely irresponsible," Poroshenko said.

If Ukraine pills out from the Minsk agreements, then sanctions against Russia will stop working, he also believes.

Interestingly, Verkhovna Rada MP Nadiya Savchenko has recently suggested Poroshenko should step down to let former Ukrainian President Viktor Yanukovych come back to power. Savchenko expressed her dissatisfaction with the outcome of the meeting of the "Normandy format" in Berlin and harshly criticized the Ukrainian authorities.

"After such talks, Petro Poroshenko should apologize to Viktor Yanukovych and then invite him to Ukraine to take office as president," she said, adding that today's Ukrainian diplomacy is a lot weaker than the one during the presidency of Viktor Yanukovych.