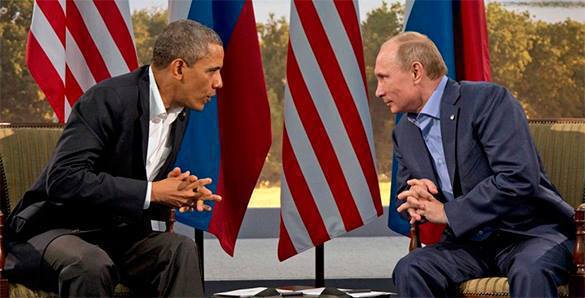 Putin and Obama were talking for about 1.5 hours. Russian Foreign Minister Sergei Lavrov and US Secretary of State John Kerry also took part in the negotiations. Shortly before the end of the meeting, members of both delegations left the room, but then stayed in a hall, waiting for the tete-a-tete meeting of the two leaders to end. Lavrov and Kerry were seen conducting an active conversation.

On September 5, Russian Foreign Minister Sergei Lavrov and his US counterpart John Kerry also had a separate meeting to discuss the regulation of the crisis in Syria. However, the talks ended with nothing, Reuters reports.

On September 4, Kerry said Russia and the US still could not come to an agreement on several issues on Syria. The US Secretary of State noted that in the near future, US and Russian experts would continue working on existing problematic issues.

According to Lavrov, Russia and the US understand each other on most issues on Syria. Yet, the United States has to keep its promise to distinguish between terrorists and the opposition. Without this agreement, Russia's plans on the coordination of actions against the terrorists with the Americans "will not lead to their practical implementation," Sergei Lavrov said, the Rossiyskaya Gazeta reports.

Speaking Sunday on the sidelines of the G20 summit in Hangzhou, US President Barack Obama announced the existence of prospects for progress between the United States and Russia on the Syrian issue. He added, though, that the two countries have not reached an agreement on cooperation in Syria yet. According to him, proceeding to the next stage of the settlement of the crisis will be difficult without concessions from Moscow.

Earlier, Obama said that he would expect Russia to be a partner in helping to improve the situation in Syria. At the same time, Obama said he did not trust Russian President Vladimir Putin, nor did he believe that Putin could ease the intensity of the violence in Syria.

On the eve of Putin's meeting with Obama, the US government significantly expanded the list of sanctioned Russian individuals and legal entities in connection with the conflict in Ukraine. The restrictive list included the companies engaged in the construction of the bridge to the Crimea, as well as Gazprom Media Holding. The Kremlin promised to analyze the new sanctions and said that Moscow would resort to "the principle of reciprocity" as it usually happens in such cases.

In April, Putin's press secretary Dmitry Peskov said that the relations between Russia and NATO were marked with the triumph of complete mutual distrust. He noted that Moscow was highly concerned about unfriendly actions of the alliance, including the build-up of NATO military presence near Russia's borders.

Obama called on Russia to cooperate with the rest of the world and said that Moscow should not intimidate its neighbors. He also said that Putin mistakenly perceived the EU and NATO as a threat to the Russian authorities.