French President Hollande hopes to bury the hatchet with Russia

French President Francois Hollande expressed his regrets about the deterioration of relations with Russia. Hollande said that lifting the sanctions against Russia was a common interest for both Russia and France. 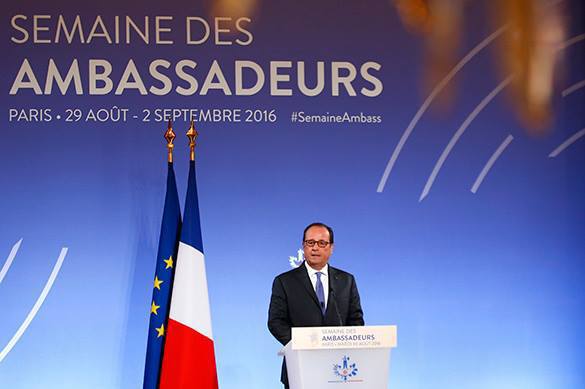 During the speech before ambassadors at the annual conference of the French Foreign Ministry, Francois Hollande said that the crisis in Ukraine changed the relations between Russia and Europe and caused damage to both sides. Mutual sanctions caused most damage to joint economic projects, the French president said.

"We are all interested in finding the best way out of this situation as soon as possible," Francois Hollande said.

He referred to historical ties between France and Russia and said that the two countries were always maintaining close and friendly relations. Hollande also set out a hope that the French-Russian relations would return back to normal. Francois Hollande noted that Russia should take responsibility for solving crises on the international arena, particularly in Ukraine and Syria. He also expressed a hope that the Norman Quartet of Russia, Germany, France and Ukraine would resume its work soon.

The outbreak of the Ukrainian crisis complicated relations between Russia, the EU and the USA. In the summer of 2014, the West introduced economic sanctions against Russia. In response, Moscow imposed counter-sanctions against Western countries.