Serbia not to impose sanctions on Russia, President says

The Serbian President Tomislav Nikolic claimed that the country would not impose sanctions on Russia, even if it's required by the EU foreign policy. 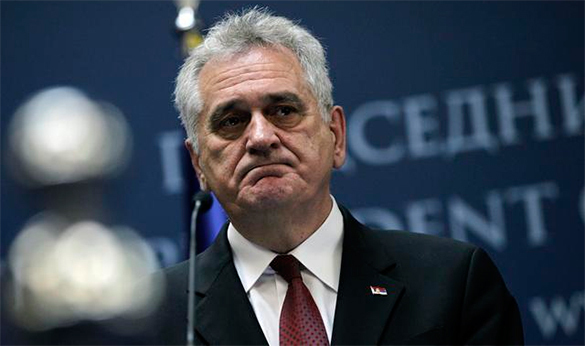 President of the Republic reported on it while meeting with the US Vice President Joseph Biden Tuesday. Biden is visiting Serbia and self-declared Republic of Kosovo, where he is holding talks on bilateral relations and implementation of agreements under the dialogue between Serbia and Kosovo.

Biden had a conversation with the PM Aleksandar Vucic in Belgrade, and met with the President Tomislav Nikolic, after which the US Vice President set off for Prisitina. The dialogue between Biden and Nikolic was held behind closed doors. It's content was revealed by the President's press service late at night.

'We cannot impose sanctions on Russia, if it implies compliance with foreign EU policy. We are connected with Russia and the US, where numerous Serbian community resides,' the head of state claimed.

Nikolic also noted that despite the fact that there is no 'better option for the Serbian citizens than way to the European Union,' he is not ready to sign an interstate document with the self-declared Republic of Kosovo.

Biden in his turn pointed out that 'the US does not expect Serbia to make a choice between it and Russia' and supports Serbia in its way to European integration.