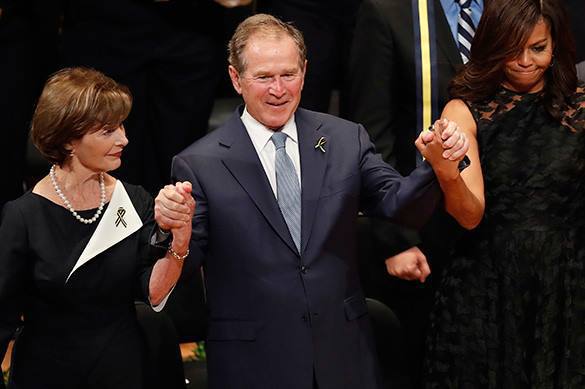 George W. Bush was seen dancing during the funeral ceremony for the police officers, who were killed in Dallas. The video sparked outrage in the United States.

Sitting US President Barack Obama with his wife Michelle was also present at the ceremony. The video clearly shows George W. Bush dancing and feeling good.

It is worth noting that President Obama may sometimes do strange tricks as well. Suffice it to recall the selfie picture that Obama took during the ceremony to bid farewell to Nelson Mandela, or the demonstration of shoe soles to Muslim leaders, his feet on the desk or chewing gum at official events.

When the video of George W. Bush dancing at the funeral ceremony appeared on the Internet, many suggested checking the level of alcohol in his blood.  is trying to stand out at the funeral of police officers in Dallas. Somebody check his blood alcohol level."

Below are a few typical comments from ordinary Americans:

"Everyone knows he likes to have a few drinks. Just got carried away.  He is a buffoon!!!﻿"

On July 8, a shootout occurred in Dallas between law-enforcement officers and participants of mass protests against police violence in the United States. The people took to the streets to express their anger about aggression and violence against African Americans. After the incident, Obama delivered his 16th speech about mass shootings during his presidency.