Spanish publication El Confidencial published an article about the attempts of the countries of Eastern Europe to rewrite their history to "forget" unpleasant facts about their cooperation with Nazis. At the same time, Ukraine, Poland and Hungary try to pretend to be victims of "bloody communism" - the regime that these countries equate to Nazism. 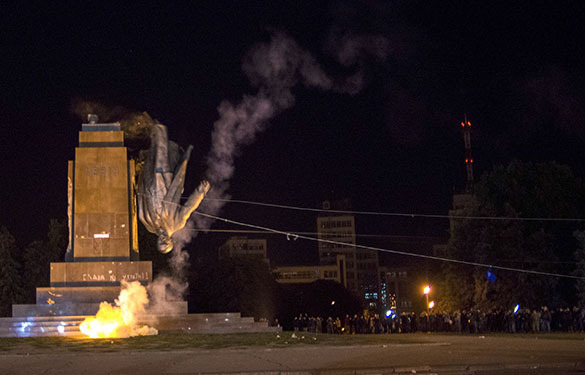 The author of the article, Antonio Martinez, compares recent acts of de-communization in Ukraine to the work of the "Ministry of Truth" from the famous Orwellian dystopia. The Ukrainian legislation provides sweeping powers to the Institute of National Remembrance "to run state policy to restore and preserve the national memory of the Ukrainian people." In other words, the sitting Ukrainian junta is writing its own history to fit its own ideology. Ukraine compares all of tis Soviet period with the yoke of the criminal regime.

The authorities of Poland plan to demolish more than 500 Soviet monuments this year. The Polish Institute of National Remembrance (IPN) has chosen monuments and names glorifying the Soviet army as the main target of the struggle.

The Hungarian authorities also try to rewrite the history of the country to relieve Hungary of responsibility for its complicity in the genocide, in which half a million Jews were killed - 70% of those who lived in the country before the start of WWII.

It should be noted that all these various national memory institutions look like an attempt from abroad to spread nationalist sentiments in the countries that border on Russia. It was reported, for example, that most of such institutes in Ukraine are funded by the USA.