The Turkish army has crossed the Syrian border and advanced 700 metres towards Aleppo. 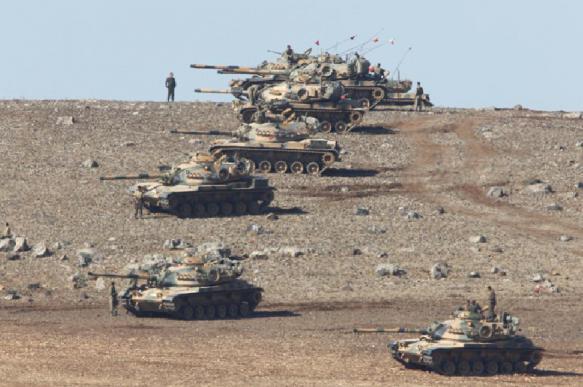 The Turkish soldiers fought their way through Syria, leaving behind the border of Turkey and Syria.

The Al Mayadeen TV Channel reported that the Turkish soldiers set a checkpoint near the city of Afrin. It is situated to the north-west of the Aleppo province. It is noted that Afrin's population consists of the Kurds mainly.

As for now the mass media possesses no official confirmation of the data.

Previously the Turkish Armed Forces delivered artillery fire against the military airfield of Minnekh, which is situated to the north of the Syrian Aleppo province.

Beside that, the Turkish Armed Forces attacked one of the cities in the same province. According to witnesses, the shells hit civil homes. Before that, the Turks struck Kurds near the city of Azaz in the north of Syria. The shells hit an airbase the Kurdish People's Protection Units had retaken from the ISIS.