Turkey's Erdogan appears as Hitler on Turkish Embassy in Berlin 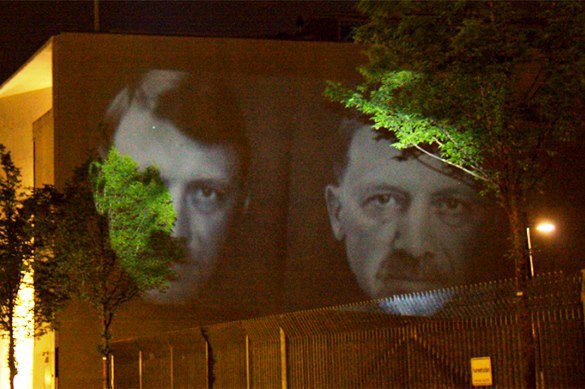 The caption for the digital image on the wall said: "He's back."

Artists from Pixel Helper group, who conducted this act, posted a photo of their work on Facebook.

"We, the Germans, know what happens in early stages of dictatorship. The similarity between the early Nazi regime and the rule of Erdogan in Turkey is frightening," Oliver Benkovski, a member of Pixel Helper, told The Independent.

In Europe, many people believe that Erdogan's rule is authoritarian rather than democratic. The resignation of Turkish Prime Minister Ahmet Davutoglu triggered discussions about the wish of the Turkish president to switch from parliamentary to presidential republic.

Scientific Director of the German-Russian Forum Alexander Rahr told Pravda.Ru that many Europeans were concerned about many things in the legislation of Turkey.

"In fact, the Europeans do not like a lot of things in the Turkish legislation. For this reason, Turkey has been seen as an authoritarian country, for which there is simply no place in the European Union. Specifically, it goes about the restriction of freedom of speech, limitation of political actions, persecution of journalists and opposition politicians," said the expert.