Sanctions not to be lifted from Russia, Germany fears USA

The German government will never stand against lifting of sanctions against Russia bypassing the US will. 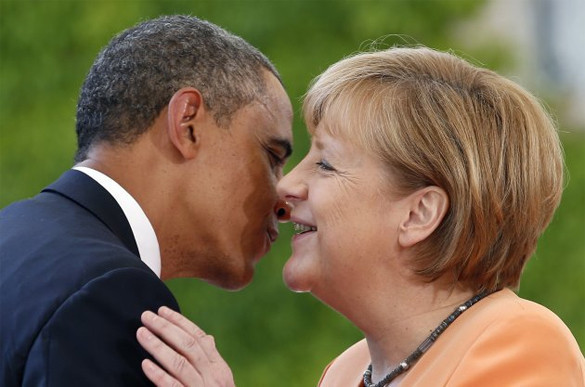 According to a survey, 60% of the German enterprises stand for immediate lifting of sanctions. 28% more are for gradual lifting. However, Angela Merkel asserts that it is possible only in case the Minsk Protocol is implemented. Taking into account that Russia is not a party to a conflict and may influence on its participants only indirectly, the stance seems to be contrived and a populist one.

Many banks and enterprises of the EU fear to go the length of cooperation with Russia because of penalty measures from the US. A similar situation took place in case with Iran. At the time the EU enterprises backed sanctions being afraid for their own cooperation with America.

Wirtschaftswoche noted that the German citizens are being tired of confrontation policy with Russia. At the same time, a massive propaganda directs protest mood against the Eastern partner.

"As Washington will follow its penalty measures regarding Russia, the Americans may indirectly dictate Europe to continue the hard-line Russian policy, no matter whether the Europeans want to maintain sanctions or not," Wirtschaftswoche wrote.

The sanctions policy struck heavily the manufacturers and farmers of the EU. Mass strikes have recently taken place in France, where they demanded to return market for agricultural produce. From the economic point of view, Europe imposed sanctions on itself. However, elites persistently keep to the line dictated by oversea curators.