The US police detained over 400 people during the Democracy Spring action in Washington. 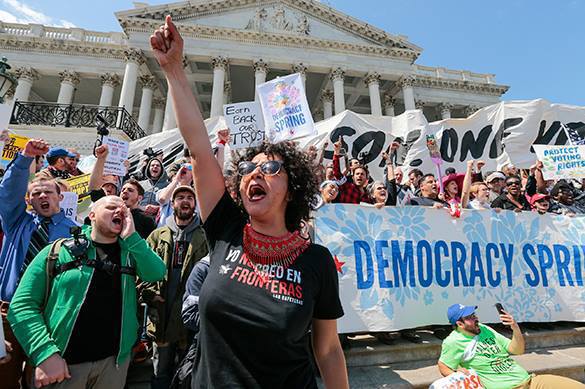 The action was organized by a group of activists, who stand for the reduction of large corporations influence on the US policy. Beside that, a requirement to hold fair elections is on the first place among the demonstrators' mottoes.

The Democracy Spring started on April 2 in Philadelphia. Today thousands of citizens have joined the action in Washington. The event was not agreed with the authorities, thus the police undertook severe measures to disperse demonstrators.

It should be noted that actions and other sort of struggle in the US against corporations, that stand behind the official authorities, have taken place for half a century. And the American policy does not change in dependence to a rich clan representative, who comes to power. Policy cannot apriori depend on the election results in a country of "consolidated democracy", where clans shared everything long ago, and hand down power and money from generation to generation, for which not only several countries, but also a whole continent can be bought. So, hence is the Democracy Spring protest itself with its ridiculous demand for "fair elections".