The leader of the Ukrainian Radical Party, Oleg Lyashko, brought several cows to the building of the Kiev government. During the action, Lyashko demanded the authorities should raise purchasing prices on milk from farmers, Ukrainian media report. 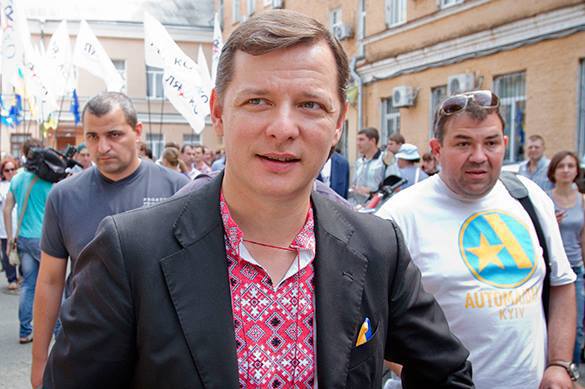 Three cows took part in the meeting in front of the government building in Kiev. The animals were taken to the city center on board a truck. The cows were supposed to walk from the European Square to the government building. The people, who also took part in the demonstration, were carrying flags of the Radical Party; some were carrying Lyashko's favorite agricultural tool - pitchforks.

While interacting with the media, Oleg Lyashko grabbed one of the pitchforks and said that when a child, he would use pitchforks to clean dung after the cows, while they fed him in return.

"Disperse, let the cows go first! Security, please disperse!" Oleg Lyashko was commanding. It appears that it was the first time when the animals appeared at a rally in the Ukrainian capital. The noise of the city and many cars scared the animals and they tried to escape a few times. However, Lyashko and his supporters stopped the cows and brought them back.

According to the radical Ukrainian policy maker, the Ukrainian government and resellers are "fooling people" because they buy milk from farmers at ridiculous prices (3 hryvnia per liter, or about 13 rubles) before selling it three times as much. It is simply unprofitable for villagers to keep cows under such conditions, Lyashko said.

After Lyuashko's speech, the participants of the demonstration decided to milk the cows. Afterwards, they tried to hand a bucket of milk to officials at the Ukrainian Cabinet of Ministers.

Noteworthy, in 2011, Oleg Lyashko tried to take a cow inside the building of the Verkhovna Rada of Ukraine (the parliament).

Also read: People come up with most unusual ways of using cow